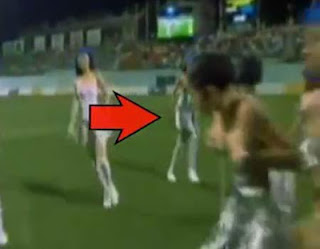 Football fans watching a pre-match dance item before last night's showpiece final between the First XI and the S-League All-Stars, were stunned after one of the dancers left the pitch following a wardrobe malfunction which exposed her nipples.

The performer, who could not be identified, was nearing the end of her dance routine when her silver-coloured tube top slipped.

She immediately pulled her top back up and hurriedly left the field in front of more than 7,000 spectators at the Jalan Besar Stadium.

Most of the spectators whom The New Paper interviewed said the incident was over in almost an instant. 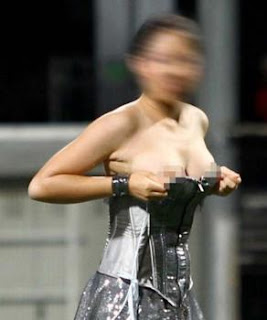 One fan, Mr Muhd Ismail, 21, said: "At first, all I noticed was that her wig had dropped off and she continued performing without it.

"A while later, she started adjusting and fiddling with her (top) like there was something wrong with it.

"The next thing, her shirt was down, although she immediately covered herself.
"But from where I was seated, it didn't look like anything was revealed." 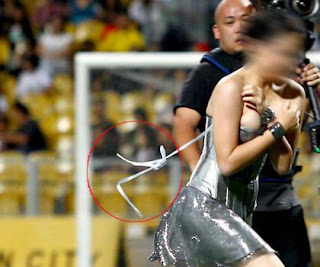 Another spectator, who declined to be named, said: "She looked uneasy with the performance throughout, as though there was something wrong with her attire.