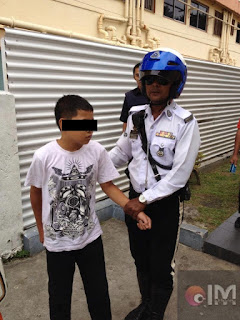 Currently heavily circulating in Facebook is the news of a 28-year-old woman claiming that she was molested by a 13-year-old boy inside the female toilet of a petrol kiosk at Jalan Munshi Abdullah.

Lareece Low Mei Yuet posted on her Facebook page that she was in the toilet at 4.25pm on Monday when the boy barged in and held her as she was coming out.

“I was leaving the toilet when he stormed in and held me, covering my mouth.

“He kissed my cheeks and touched my chest as I struggled to fight him off,” Low claimed.

Low said that she managed to shout and bit the boy’s fingers between struggles, while fighting hard to open the door.

“I heard sounds of people outside the toilet and I fought harder to open the door.

“I managed to slot my hand between the gaps to prevent it from closing.”

Low said that several people outside the toilet heard the commotion and came to her aide.

The boy was caught and held at the kiosk until police arrived. During that time, they questioned the boy and found that he was merely 13.

State CID chief Asst Comm Raja Sharom Raja Abdullah said that a report had been lodged by Low.
He said the boy had been remanded for four days pending further investigation.

The case is being investigated under Section 354 of the Penal Code for outrage of modesty.

It is a shock to know that a boy which has a long future ahead and is barely legal age is ready to commit such a crime. He is brazen enough to attack a woman twice his age. Well, I hope this will teach him a lesson to control his lust. If this doesn't change him, he will probably try a "weaker" victim such as a young girl or arm himself with a deadly weapon. This dude seriously need to be counselled. I blame all this to  his parents for not watching their children's activities. I don't know where he got this idea. Porn, perhaps?