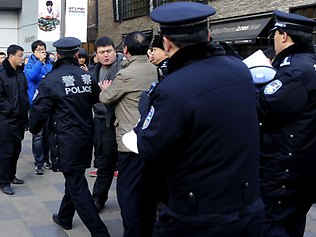 APPLE yesterday said it was suspending sales of the new iPhone at its China stores after fans desperate to get their hands on it fought with a security and threw eggs at an official outlet.
Police detained at least two people outside the Beijing shop today when angry crowds who had queued for hours in freezing temperatures for the Chinese launch of the iPhone 4S were left furious after being refused entry.
An AFP reporter outside the store in the upmarket Sanlitun district saw frustrated shoppers attack a security guard after police with megaphones shouted at the 1000-strong crowd to go home and said the gadget would not go on sale.
"We waited here all night. It's not fair," said 18-year-old Tom Sun. "We're angry because this American company told us it would open its doors at 7:00 am."
Apple said its other mainland China stores - another in Beijing and three in Shanghai - had sold out of the new device within hours.
"The demand for iPhone 4S has been incredible," said spokeswoman Carolyn Wu.
"Unfortunately we were unable to open our store at Sanlitun due to the large crowd, and to ensure the safety of our customers and employees, iPhones will not be available in our retail stores in Beijing and Shanghai for the time being."
Apple said customers could still order iPhones online and at other authorised retailers in China. A worker at a small, downtown China Unicom shop said 80 iPhone 4S models had sold out in four hours.
Some of the people gathered outside the Sanlitun store from the early hours yesterday told AFP they had been paid 100 yuan (almost $16) each by touts to stand in line and wait for the doors to open.
Shouts of "Open the doors!" and "We want mobile phones!" went up occasionally as the restless would-be customers jostled to get close to the front of the pack. Many took videos of the scene, using older iPhones.
One young Chinese man who refused to give his name said he planned to buy as many of the phones as he could and resell them at a profit of at least 500 yuan ($79) a piece.
"These are not fake iPhones," he said. "People want Steve Jobs' best."
Reselling is a major industry in China, where the new iPhone has been on sale for months at a premium on the black market, after being smuggled in from neighbouring countries and from Hong Kong.
The new model, whose features include a high-definition video camera and a quick-witted artificial intelligence "personal assistant" named Siri, had its global launch in October.
Die-hard fans in China, which has the world's largest online population with more than 500 million users, have been known to line up for days to get their hands on the latest Apple products.
"I will be really upset if they don't open the doors," said 29-year-old Li Tianye, who had travelled for two days by bus from the eastern province of Shandong to get to Beijing for the launch, staying in a 24-hour McDonald's overnight.
But not everyone was disappointed. Some Beijing shoppers willing to pay a premium bought the iPhone 4S in an electronics retailer one floor below Apple's Beijing Sanlitun store after seeing the trouble upstairs.
"There was a problem at the Apple store. Too many angry people," said a young Chinese man who gave only his surname, Du, and said he had been waiting since Thursday evening to buy the phone.
Du told AFP he had paid 5388 yuan for the most basic model of the iPhone 4S - sold online in China by Apple for 4988 yuan.
Calmer scenes were witnessed in Shanghai, where an AFP reporter said Apple stores had opened to large crowds and the phone had been on sale.
Greater China - which includes Hong Kong and Taiwan - has become Apple's fastest growing region, with revenue there second only to the United States.
The California-based company has recently expanded aggressively in China, opening its first store in Hong Kong and its third in Shanghai last September, which brings the total to six in Greater China.
But Apple's popularity has also brought problems, with widespread counterfeiting and illegal smuggling of its products.
In July, an American blogger uncovered fake Apple stores in the southwestern city of Kunming, where even staff working there did not appear to know they were fake.
News Source: heraldsun.com.au
Posted by belogkiter at 10:32:00 AM