A lesbian couple in Batu Pahat, who had been dating for the past two years have taken their relationship to a new level by undergoing a traditional wedding ceremony. 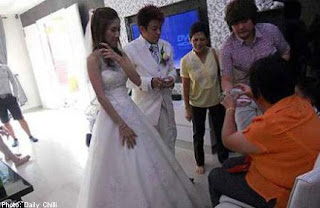 Thomas, 29, and Apple, 27, both property brokers underwent a traditional Chinese tea ceremony at their home here at about 10am on Saturday.
It is learnt Thomas had proposed to Apple about two months ago. They also set up a Facebook page as a testament of their love.
However, both declined to be interviewed when requested by reporters.
Checks on their Facebook fanpage showed revealed many messages posted in Chinese with over 656 "likes".
One friend identified as Wong Shally said she wished she would be lucky enough to experience a love like that of Thomas and Apple and congratulated the "newly weds".

Another Facebook friend, Winny Chin, congratulated the two and said that they were an example to other similar couples.
Thomas and Apple's Facebook page features a pre-wedding wedding photo shoot album entitled "The happiest lesbians" with several pictures of their wedding ceremony.
Malaysia, predominantly a Muslim country forbids same-gender marriage. Therefore the marriage between Apple and Thomas is not recognised as legal by the Malaysian law.
Picture and news souce: dailychilli.com
Posted by belogkiter at 10:00:00 AM