A female prison officer in Shandong Province's Jinan City was fired yesterday after she - while wearing her guard's uniform - and her husband beat up an elderly woman. 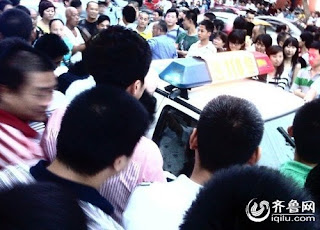 The pair were surrounded by thousands of angry Jinan residents demanding an explanation.
The officer, surnamed Lin, and her husband, surnamed Zhu, have been placed under detention for 15 days by police for slightly injuring the old lady.
According to witnesses, Lin visited a technician's store on a street to repair her electronic moped at 5pm on Wednesday, but started arguing with the technician's wife, surnamed Mu, who is in her 60s, because someone jumped the queue. 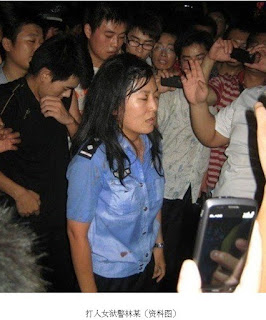 As the dispute became heated Lin began beating the older woman and called her husband to join the fight in front of a crowd of people.
Lin, in her officer's uniform, is alleged to have shouted at the woman: "If I don't want you to live in the city, you can barely find a place to beg for coins!"
This alleged threat aroused public anger and thousands of Jinan residents took the street, surrounded the couple and demanded an explanation for their behavior, witnesses said on the microblog Weibo.com.
The couple tried to lock themselves in a police car which came to pick them up, but the angry residents blocked the car's path, with some trying to overturn it.
The couple finally emerged from the car and knelt before the residents, begging them to let them go.
Mu's husband, surnamed Xie, stepped forward and asked the crowd to forgive the couple, while his wife was lying injured on the ground, witnesses said.
Angry residents beat the couple, poured dirty water on them and photographed them, before police bundled the couple away, according to witnesses.
Posted by belogkiter at 11:41:00 PM