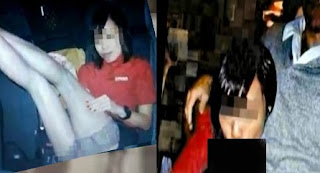 Airline Cathay Pacific is conducting an investigation related to the photographs which allegedly showed a stewardess performing oral sex on a pilot on the plane’s passengers from Hong Kong.

Several pixellated photos of the act have been published in local Chinese-language media, showing the woman in a red outfit resembling Cathay’s cabin crew uniform giving oral sex to a man who the reports said was a pilot.
“We are conducting a full investigation into the matter and there are some indications that the female shown in the photos may be a member of our cabin crew,” a Cathay spokeswoman said.
“Our investigations are continuing and we have nothing further to add at this stage,” she said, without commenting on the identity of the man, whose clothing in the published photo did not appear to be a Cathay pilot uniform.
“There is no evidence whatsoever to suggest that the act took place in-flight, and there are no reasons to believe that any safety breaches have occurred,” the spokeswoman said.
Reports in Hong Kong media said the pictures had been widely circulated on an online forum for pilots, and added that the duo in the photos were a couple.
According to the Chinese-language Apple Daily, the pilot — a foreigner — has issued a legal letter to the newspaper saying the photos had been stolen from his personal computer and that he had lodged a police report.
Cathay Pacific, Hong Kong’s top airline, has 13,000 staff around the world, including more than 8000 cabin crew and 4000 working in airports, according to its website.
Posted by belogkiter at 2:58:00 AM