Stuntman falls to his death 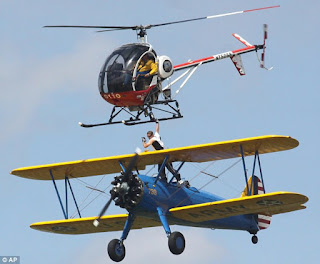 A wing walker plunged 200ft feet to his death when his air show stunt went disastrously wrong - but tragically many in the crowd thought his fall was part of the act.


As these terrifying pictures show, Todd Green, 48, had been attempting to grab on to a helicopter hovering above a bi-plane as part of a death-defying stunt.
But as he reached for the metal landing skid on the helicopter he slipped and fell to his death.
Many in the 75,000 crowd at the air show in Selfridge, near Detroit, Michigan, thought the fall was part of the show and that a dummy had been thrown to the ground. 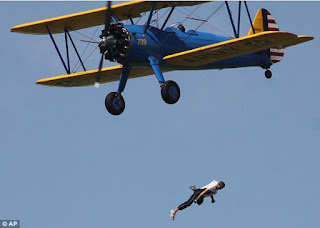 It was only when emergency crews rushed out to the stricken wing walker that they realised it was an accident.
Officials said Green, a father of two, had tried to grab hold of the helicopter from a Stearman aircraft at Selfridge Air National Guard Base, in Harrison Township, on two occasions, and slipped as he made a third attempt.
An ambulance took him to Mount Clemens Regional Medical Center, but he died from his injuries.
Witnesses expressed surprise that Mr Green did not have a parachute, but even if he had it may not have opened in time as he was only 200ft above the ground. 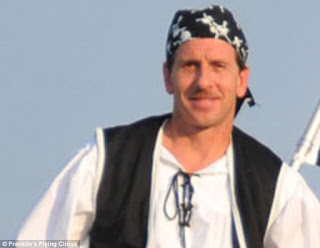 Green had reportedly been performing aerial stunts for more than 25 years and is survived by his wife Dawn, son Tyler and stepson Derrick. You can watch his video here.

My condolences to Mr. Todd Green and his family.
News Source: dailymail.uk.co
Posted by belogkiter at 2:29:00 AM