A California man convicted of ejaculating into a co-worker's water bottle has been ordered to pay the woman more than USD27,000. 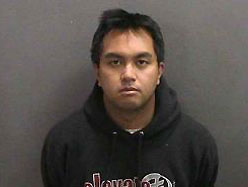 Superior Court Judge Walter Schwarm said Monday Michael Kevin Lallana, of Fullerton, Calif., must pay restitution for therapy and loss of wages, reports the Orange County Register.
Lallana was sentenced to 180 days behind bars after he was convicted of twice putting semen in his co-worker's water bottle without her knowledge at a Newport Beach, Calif., financial company last year.
The victim sent the water bottle in for testing because it tasted strange, and the water was found to contain semen.
The jury found Lallana, 32, committed the acts for sexual gratification.
We ought to be careful if there are such sadists in our midst in office or else we will need to constantly watch what we drink. We may think that we're drinking coffee without realizing that we may have something "extra" in it. Ewww…. Makes me wanna puke.
Posted by belogkiter at 10:33:00 AM