Police officers in China have come up with an unusual measure to deter speeding drivers - by dressing stone monkey statues in fluorescent jackets. 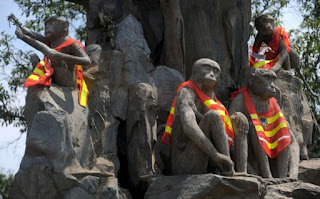 Clearly not content with the outcomes of speed cameras and sleeping policemen, traffic enforcers have turned to the novel idea of playing dress-up with animal statues.
Wearing police issue high-vis vests, the monkeys have been positioned along the roadside in the city of Changsha.
One installation shows a collection of stone primates huddled around a tree, glaring out at the oncoming traffic, one is carved swinging from a branch as another sits mesmerised by his feet.

The law enforcers in the capital city of southern China’s Hunan Province hope that the strange statues will remind drivers to not break the law.
Quite how well the monkeys will reduce traffic offences remains to be seen.
And there's also the chance the eye-catching figures may actually cause accidents by distracting drivers due to their bizarre appearance.