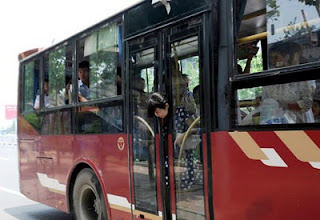 In China's Anhui Province, an unlucky lady left cringing in agony when her neck was stuck in between the bus pneumatic slide glide doors during the time the bus driver was unaware the situation, move on to his next stop.
The ridiculous incident occurs when the impatient bus driver closed the pneumatic slide glide doors while the lady about to disembark the bus causing her head trapped between the doors, resulting her body situated inside the bus while her head was outside. 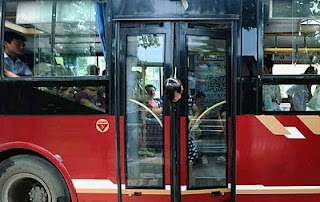 Fellow passengers called out to the impatient driver to open the doors to free the lady's head, which he eventually did, and she escaped with just a sore neck.
As soon as she was let off the bus she walked away without uttering a word of complaint. 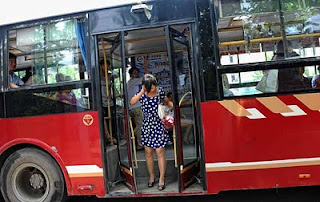 In a way she is fortunate as her head isn't caught outside leaving the body outside the bus. She would have been dragged by the bus which would result in fatality. The next time she goes on the bus, she'll have to be extra cautious with those bus drivers.
Posted by belogkiter at 9:55:00 AM