Usually when one is charged with assault, it is mostly either physical or verbal. The news below I read from 6abc.com is bizarre and hilarious! 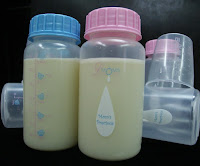 In Ohio, a woman used her own breast milk as a weapon.
Sheriff's deputies in Delaware, Ohio, say they responded to a call about a domestic dispute over the weekend. A man told the police that his wife had been drinking at a wedding, and that she had hit him several times before locking herself in a car.

Deputies who arrived at the scene said the woman, Stephanie Robinette aged 30, was yelling profanities and refused to get out of the car.

When the deputies tried to remove her from the car, she told the police that she is a breast-feeding mother and she then exposed part of her chest and sprayed them with breast milk.