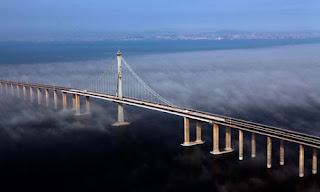 The 42.5km Qingdao Haiwan Bridge would easily span the English Channel and holds the title as the world longest sea bridge.

The eight-lane, 35-metre-wide bridge opened to traffic on Thursday morning, China's Xinhua news agency said. Built over a four-year period the project cost about 10 billion yuan (USD1.5 billion) and uses 5,000 pillars. It shortens the driving route between the two locations by about 20 miles. The bridge has broken the Guiness World Records, surpassing the previous longest bridge over water was the Lake Pontchartrain Causeway in Louisiana by about 4km. "The earthquake- and typhoon-proof bridge" is designed to withstand the impact of a 300,000-ton vessel," Guinness said.
It is reported that some 450,000 tons of steel was used — enough for almost 65 Eiffel Towers — along with 81 million cubic feet of concrete to build the bridge. The sheer scale of the bridge reveals further recent advances made by Chinese engineering.
China is already home to seven of the world's 10 lengthiest bridges, including the world's longest, the 102-mile Danyang-Kunshan rail bridge, which runs over land and water near Shanghai.