I'm an animal lover and I felt uncomfortable when I read and watch the video of how this poor kitten was abused. I've 2 cats at home and I love them dearly. I couldn't imagine how the couple can go to the extent to abuse the innocent kitten.
A video has gone viral showing a couple abusing a kitten by submerging it repeatedly in a puddle of dirty water before tossing it around. 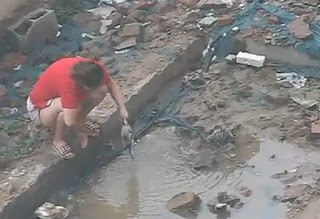 According to source, the incident happened in Tongzhou district in Beijing, China on 19 July 2011.

A man is also seen in the video participating in the act later by tossing the cat to the woman.
Throughout the video, an adult cat, presumably the mother to the kitten tries to go to the kitten to pick the kitten up but was shooed away by the woman. 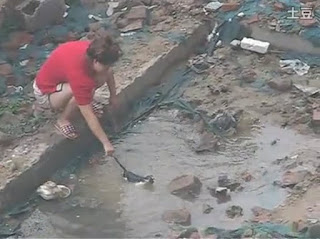 The entire cat abuse episode lasted for about 30 minutes and it ended when the kitten was thrown into an underground basement by the couple. You can view the shorter version of the video here.
Posted by belogkiter at 10:37:00 AM