This was the dramatic moment when a crazed motorist staged a tense stand off with cops – by threatening his own daughter with a razor sharp samurai sword. 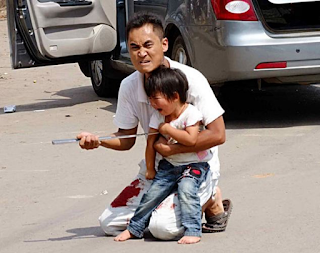 The dramatic incident occurred in China, when the father, Zhang Gang was involved in a hit-and-run accident. The 34-year-old rammed into another car, instead of stopping and to resolve the problem, he tried to speed off. However, the police in the area immediately chased and stopped him 15 minutes later when two police cars were blocking his car.

Cornered outside a farmer's market at Yongren country, in Yunan province, Zhang Gang still refused to surrender and demanded police get out of the way. He came out of the car carrying a sword with blade length of approximate 20 inches as he holds his petrified daughter who was shocked and crying while his wife stay silent in the car for the whole scene. 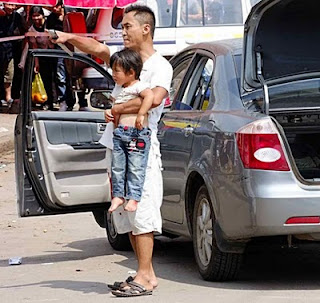 Local farmer Lu Yin said: ‘I heard the car coming at speed and then slam on the brakes when two police cars blocked the road.

‘Then this man leapt out carrying a huge sword and waving what I thought was a doll.
‘But then I realised it was a little child. She seemed shocked but then she started crying when she heard her daddy shouting.

‘He had the razor sharp sword at her chest the whole time and was shouting ‘Let me go or I’ll kill her I swear it – I will show no mercy.’

‘Then he climbed back in the car with the kid and still with the sword at her chest demanded he be allowed to drive off.’

But a trained police negotiator was soon on the scene and started speaking to the road rage dad and several of his relatives were also sent over – allowing specially trained officers to get into position and storm the vehicle – freeing the little girl unharmed.

Witness Lu Yin said: ‘They were talking to him for an hour to calm him down – but the operation to free the girl was over in seconds.’

You can watch the dramatic video here on youtube if it has not been taken down.
Posted by belogkiter at 1:14:00 AM