Malaysians are generally peaceful nature even with Bersih Rally

9 July 2011, Bersih Rally 2.0 captured the media headlines whereby more than 50,000 demonstrators marched down the streets of KL, pushing the Election Commission of Malaysia (EC) to ensure free and fair elections in Malaysia. It demanded that the EC clean up the electoral roll, reform postal voting, use indelible ink, introduce a minimum 21-day campaign period, allow all parties free access to the media, and put an end to electoral fraud.

During this fateful day, I was on my way to my friend’s wedding in Jalan Ampang and I was caught in 2 roadblocks. I wasn’t being stop by the police because I wasn’t wearing any Bersih T-shirt nor intend to attend the rally but I was caught in a massive jam towards the city. I was following the updates on the rally closely on media and it is reported that there are chaos in the city. Tear gas and water cannons are fired towards the crowd but the crowd is still determined to march forward. 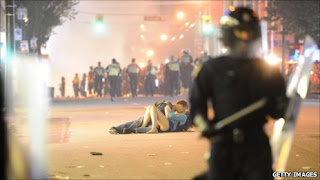 The Bersih rally’s chaos has caught my mind of the “kissing couple” in the recent Vancouver riot which started after the Stanley Cup. Though Bersih is meant to be a peaceful rally, there are people who are injured after the police fired water cannon and tear gases at the crowd. I thank God that there are no serious untoward incident during the Bersih rally where Malaysians are still generally peaceful people with no major violence such as street burning and looting which happened in Vancouver.
As this blog is not meant to be a political blog, it is not appropriate to comment which party is on the right side or not. As for me, I know where my vote will go to for the next General Election.
Posted by belogkiter at 12:11:00 AM