A Chinese couple sold their three children for cash to play video games, according to a local report.

Sanxiang City News newspaper said the parents, both under 21, sold their children for money to fund playing online games at internet cafes. 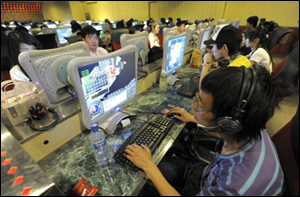 In 2009, Li Lin and Li Juan sold their second child, a baby girl, for less than $500. They reportedly spent the money shortly after.
They then sold their first child, a boy, for about $4600. They sold their third child, also a boy, for the same amount.
They were reported to the police when the man's mother found out what they had done. Apparently the 2 parents showed no remorse for their actions. "We don't want to raise them, we just want to sell them for some money," they said. The parents are young and naive, so when asked about their nefarious deeds, they stated that they were unaware what they were doing is illegal.
The games played by the couple were not disclosed, or the type of games they were.
The couple met in an Internet cafe in 2007, and shortly after meeting quickly consummated the relationship and moved in together, spending most of their time playing video games in Internet cafes. Shortly after their first child was born in 2008, they left it at home and traveled 30km to play video games.
The trophy goes to these 2 parents as being the most disastrous parents of the year!