A woman getting tired of her husband’s constant drinking chained him up at the park in China. 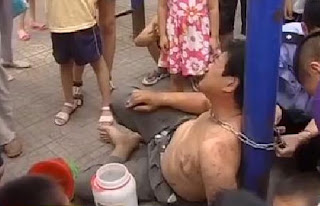 Residents at a community in Jining of Shandong Province found the bare-chested man chained to a gym machine.
A note found stuck to the machine, believed to be written by the wife, read: 'Don't release him, after releasing him, he will still drink. Thank you.'
The man told reporters that said he had picked up the drinking habit over the years and that he always returned home drunk. He had promised the wife to quit the habit but admitted that he had failed to keep his promise.
He apologised to the wife and again, he promised to stop drinking. But a few days ago, he returned home drunk again. His angry wife then dragged him to the park and chained him up.
She put a glass, a water bottle and a chamber pot next to the husband before leaving.
Police personnel, who were called to the scene, later released the man from his bondage.
This is the most outrages “rehabilitation” program that his wife executed! Hmmm... Probably this method can be used for husbands that loves gambling and vice too. ☺
Posted by belogkiter at 1:18:00 AM