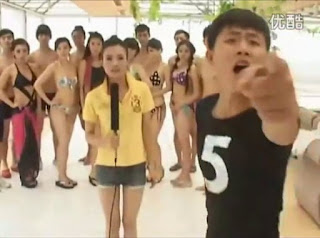 A Chinese boyfriend stormed into a bikini contest show and he was furious that his girlfriend entered the contest without his permission. A quarrel ensured and in the rage of anger, he tore his girlfriend’s bikini top and almost got into a brawl when other male contestants interfere to stop the fight. At the end of the scene, he threw a book to the floor to demonstrate his frustrations.

The guy should be charged for outraging the modesty of his girlfriend and be put behind bars. If he really loves her, he shouldn’t try to expose his girlfriend’s modesty. If she still carries on, well, just dump her if he cannot accept it. In a rage of anger, he has made himself guilty and didn’t think of the consequences. You can see clearly that he has the element of violence in him.

The video has gone viral and you can watch the crazy guy in action on youtube. You can watch it here if the video hasn’t been brought down.
Posted by belogkiter at 11:08:00 PM