Many of us are fans to musicians, singers, actors or athletes. Somehow or another, one day our idols will retire. 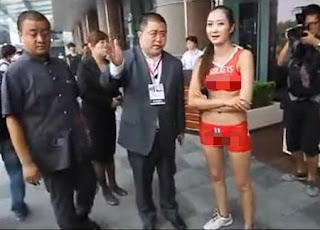 Yao Ming, a well-known Chinese international basketball player for Houston Rockets recently announced his retirement. The 30 year old Houston Rockets star cited his early retirement due to injuries to his foot and ankle, including the third fracture to his left foot sustained near the end of 2010.

Covered only in body paint to simulate a basketball jersey with "Yao" and his jersey number, "11" on the back, she was stopped by security guards. The woman, who was seen crying over Yao Ming's retirement, was later led to a room by the guard.

Nude protests are common for PETA’s No-Fur campaign but protesting for an idol’s retirement in nude is something bizarre. This woman is a hardcore fanatic that will go to great length to protest on her idol’s retirement.

A public icon’s retirement which will have no protest and probably making everyone happy will most likely goes to… Politicians! (No offence intended, just kidding here).