Too drunk to drive? Just push the car! 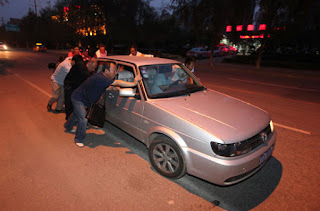 After a very happy office party held in a restaurant in downtown Changchun, northeast China’s Jilin Province, everyone in attendance drank too much and when it came time to leave were all were too drunk to drive home. The 10 employees ended up pushing their boss’s car home after all of them are too drunk to drive.
Starting 1 May 2011, drunk driving is a heavy offence in China which carries a heavy punishment in which an offender is punishable by up to six months in jail in addition to a hefty fine.
Boss Zhang Fei was uncomfortable with the idea of leaving his car at the restaurant overnight. His vice president, Huang Weiyun, who was just as drunk as everyone else, but he managed to come up with a workable albeit different solution to safely get cars and people home.  Huang suggested that the 10 workers push the vehicle, which is a VW, with Zhang at the wheel, three miles back to his home. The journey took 45 minutes to complete but the employees seem to enjoy it as they were singing and laughing all the way with onlookers watching and taking photos.
Theoretically, they did not break the law because the car’s engine was not running and traffic officers let them pass without penalty. Still, they warned passersby that pushing a car through the city streets when drunk can also be dangerous.

I take my hats off to the 10 employees for going the extra mile for their boss and Huang for his creative idea while trying to abide with the law. Truly remarkable!
Posted by belogkiter at 12:27:00 AM