How long do you need to work to buy a Big Mac?

Yesterday as I was eating my dinner in McDonald’s I saw an advertisement posted by McDonald’s hiring temporary staffs at RM4 per hour. I began to think of the Big Mac Index which is frequently used as a measurement of a country’s purchasing power. A Big Mac in Malaysia is sold at RM6.70 each excluding taxes. The price of Big Mac may differ slightly in places like in Genting Highlands.

The Big Mac was chosen because it is available to a common specification in many countries around the world, with local McDonald’s franchisees having significant responsibility for negotiating input prices. Currently McDonald’s Big Mac is sold in about 120 countries. The Big Mac index enables a comparison between many countries’ currencies. 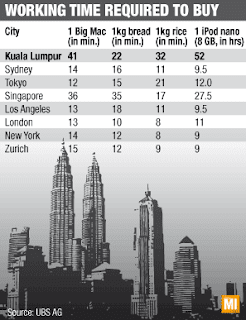 How hard does an average Malaysian needs to work to buy a Big Mac in McDonald’s? Well, it takes 41 minutes for an average Malaysian to work in order to afford a Big Mac. In comparison to our neighbor in Singapore which takes 36 minutes while strongest buying power is Tokyo which takes only a mere 12 minutes to buy a Big Mac. Generally the shorter time an average person in a country takes to a buy Big Mac, the better paid the person is.

As Malaysia is struggling to overcome the effects of inflation, the purchasing power of an average Malaysian is weakening as the days goes by. As subsidies are cut, the inflation rate will go up in tandem. As our Malaysian government always claims that our petrol is the cheapest in the region, our Malaysian salaries are also one of the lowest. Malaysians are paying (dollar to dollar) one of the most expensive internet broadband service and cars in the region. In fact our houses in Klang Valley and Penang are beyond reach for many average household incomes.

As price of petrol, sugar and power tariffs are up, naturally the cost will be passed down to consumers for necessity goods. Gone are the days when a cup of teh tarik (tea with milk) is only RM0.80. Today I bought a packet of nasi lemak (rice with chilli and anchovies) for RM2. It used to be RM1 in those days. 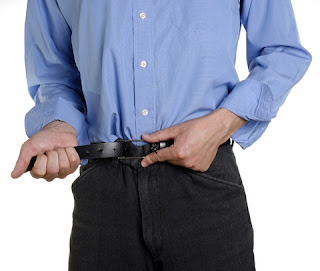