If you so happen to fall into a deep hole filled with poo, what will you do? Sing your favourite song! Yes, that's what a drunk man did in China. 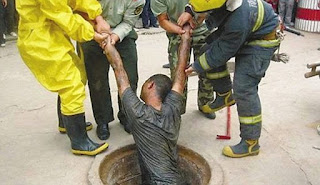 Yuan Fan got into the stink after he went out out drinking in Kunming, the capital city in the Yunnan provice of south Western China, and became embroiled in an argument with a group men.
Running away to avoid a possible beating he spotted - not quite the best hideout - an open manhole. Diving down the shaft he then hid amongst human waste until his chasers gave up.
The 32-year-old was discovered when he began singing and locals called the emergency services who had to wear chemical suits to retrieve him. Initially they didn't have much luck though as Mr Yuan swam off every time they attempted to pull him out to safety. Finally after two hours on the run he was dragged from the pipe and after saying thanks he passed-out.

A fire brigade spokesman involved in the rescue said after the ordeal: 'Once we pulled him out he said thank you and then fell asleep. When we woke him up he made his thanks again and then set off in the direction of what we assume was his home.'
Oh my God, I can't stop laughing. That's one hack of a funny news!!