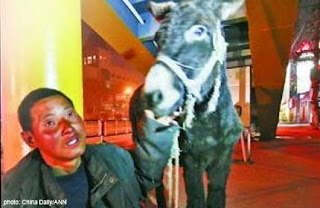 A 34-year-old migrant worker, who works in East China's Zhejiang province, is walking with his donkey more than 2,400 kilometers to get back home after buying it in Northeast China's Heilongjiang province, Yangtze Evening Post reported Thursday.


Zhuang works at a construction site and often has to carry heavy loads on his shoulders walking uphill. A strong and docile donkey seemed to Zhuang just the companion he needed to help him with his job and allow him to save his energy.


In July, Zhuang officially started his search for a donkey. He left his job, walked north and passed Beijing and Xi'an, a well-renowned ancient cultural city in Northwest China. Finally, Zhuang came to a livestock trade market in Qinggang county, Northeast China's Heilongjiang province and handpicked two donkeys. A 4-year-old donkey cost him 2,200 yuan and an 8-year-old pregnant one was purchased for 2,000 yuan.


Zhuang assumed that it wouldn't take long for him to ride the two donkeys back home, so he embarked on his return journey along the national expressway. But soon he was proved wrong. When he completed only about a quarter of the journey, the pregnant donkey totally gave up walking and was sold by Zhuang at a discounted price of 1,555 yuan.


Five months later, Zhuang finally arrived in Nanjing, East China's Jiangsu province, still 200 kilometers from his final destination. According to Zhuang, he has already spent more than 10,000 yuan, most on shoes as he walked most of the journey.


Zhuang revealed that he can walk 30 kilometers a day if he doesn't rest, so he still needs to walk about seven more days to get back home.
SOURCE: news.asiaone.com
Posted by belogkiter at 12:31:00 AM