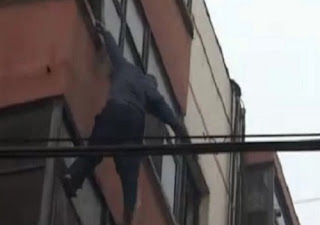 In September, early in the morning at Xinzheng Road, Zhengzhou city, a crowd of people gathered outside a building. Looking up at the 5th floor balcony, an old man was standing outside of a window; half of his body dangerously in the air.
“Do not take things too hard, a dog’s life is better than no life.” fellow neighbours trying discouraged the elderly man from jumping off the building. And just below the balcony, his wife was seen kneeling on the ground, shouting and crying.

The elderly piercing cries simply expressed his despair of life. Fire men tried to enter the house but the door has been locked from the inside.


The old man suddenly rolled over with one hand hanging in the window, and the whole body was in the air. Meanwhile, the rescue team rushed to open up a rescue cushion.
But before the cushion was filled with air, the old man jumped off the building. The man was immediately rushed to a hospital of Zhengzhou City, but died despite efforts to save him.
According to nearby residents, the jumping man is a retired worker in a cotton mill in Zhengzhou and has three sons.
“The old man’s eldest son has sold the house and he was forced to live on the streets, the other two sons do not want to support him either.” a woman neighbor said.
These ungrateful sons should live and die in regret. They have forgotten how their father has toiled to raise them up.
﻿
﻿
Posted by belogkiter at 6:36:00 PM