Singaporean man bringing his family for a holiday to space

Oh my god! Our neighbor, a Singaporean, is freaking rich that he decides to have a holiday in space! I wonder who this wealthy man is. Go read about it below: 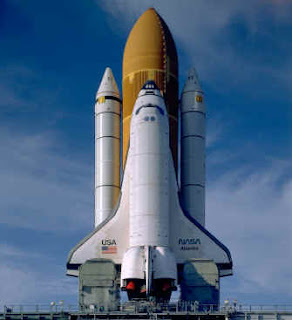 A Singaporean businessman, his wife and two children have paid US$1 million to become the first Asian family to fly together on space-tourism airline Virgin Galactic, the company announced Monday.
“I had lunch yesterday with a guy who got in touch with us in Singapore, and over lunch he signed his contract for not just a seat, but for a whole flight,” Virgin Galactic Commercial Director Stephen Attenborough said.
Speaking at an international media and marketing conference in Singapore, Attenborough said the customer handed over a check for US$1 million and asked to remain anonymous because “apparently he hasn't told his wife yet.”
“So he is going to become, or he and his family will become, the first family from Asia to become astronauts together,” Attenborough said.
The U.S.-based firm, part of British tycoon Richard Branson's Virgin conglomerate, has sold bookings since 2005 at US$200,000 per seat even though it has not yet set a firm timetable for space flights to be launched from New Mexico.
Branson announced in late 2004 that the firm would launch the world's first space tourism flights in two to three years but after delays, the target has now been moved to 2013.
Attenborough told AFP in an interview that the Singaporean businessman chartered one exclusive flight for his family on the six-seat aircraft SpaceShipTwo.
The SpaceshipTwo, with two pilots, is designed to be launched by a transport plane called White KnightTwo and will be guided by a rocket motor before gliding back to Earth.
“They should be flying in the first year of commercial operations. They'll be within the first thousand human beings to have ever gone to space, or they should be,” Attenborough said.
He said nine out of nearly 500 tickets sold worldwide had been bought by customers in Singapore, which has one of Asia's highest concentrations of millionaires.
Families from other countries such as Canada, the United States and Britain have also bought tickets, Attenborough said.
“About 35 to 40 percent are from the United States, 15 percent from the UK... I think there are 46 countries now represented in total and for many of those countries, the people will be the first astronaut for that country,” he said.
Customers from the Asia-Pacific region now account for “approximately 15 percent” of ticket sales despite a ban on Virgin Galactic selling seats in China, the region's biggest economy.
“The space vehicle is US technology and they fall under a set of regulations in the United States which means that there are some countries where at the moment we're not permitted to sell tickets,” he explained.
“I think Asia is a huge opportunity for us, absolutely. Just the interest we've had from Singapore, which is a fairly small part of Asia, I've been extremely impressed,” he said.
“We have seen an increasing amount of interest from this part of the world and hopefully that will translate into lots of future astronauts.”
In anticipation of burgeoning future demand for space tourism, Attenborough said Virgin Galactic had already ordered more spacecraft.
Attenborough said the company expected to take three years to recoup its investments, which he estimated at US$300 million to US$400 million, with one flight a week when commercial operations begin.
If everything goes smoothly, “we would hope to be flying people to space by 2013,” he said.

If one day I can afford to send myself to space for a holiday, will I be granted the title of "Datuk" just like our Malaysian angkasawan?