Woman was stripped topless for suspicion of stealing iPhone 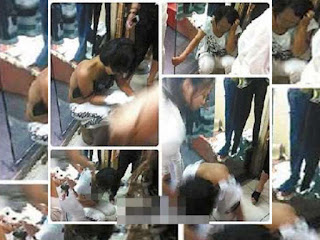 A pregnant woman was stripped after allegedly being caught stealing an iPhone in Yongkang city, Zhejiang province.

The incident took place on Sunday night in the women’s clothes section on the second floor of a Times Square mall.

The two-month pregnant woman, who was not named, was accused of taking the owner’s black iPhone and then attempting to run away.

Nearby store owners caught her and started cutting away her clothes until she was practically naked from the waist up.

It was at this point the thief started crying out that she was pregnant.

Police were called in and took her to a nearby hospital to check if she was indeed up the duff. Which she is.

Since the phone was not found on her body, police said there was insufficient evidence of a crime and she was released.
Posted by belogkiter at 4:14:00 PM