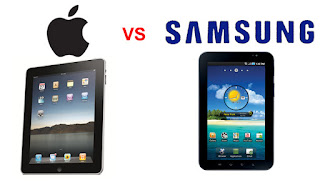 In recent times, Samsung has become a major player and fierce competitor to Apple with its release of Samsung Galaxy mobile phones and also Samsung Galaxy Tab. Apple claim against Samsung's design features such as the screen icons. The lawsuit alleges that Samsung violated Apple's patents and trademarks. Samsung Galaxy products uses Google Inc's Android operating system, which directly competes with Apple's mobile software. Samsung said that it would respond to the legal action "through appropriate legal measures to protect our intellectual property."

Currently Samsung is on a fierce competition with Apple in the tablet market. To competitively compete with Apple, Samsung redesigned its new 10.1-inch tablet, first introduced in February, to make it the thinnest in the category after Apple set the trend with its iPad 2.
Posted by belogkiter at 11:43:00 AM