Crazy drivers willing to do anything to save costs

A penny-pinching truck driver was so focused on getting his smashed-up rig repaired on the cheap that he tried to drive home without a windscreen. 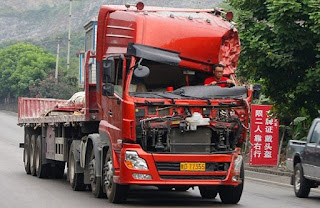 Fortunately, road hound Lu Chen was spotted by police after he backed up traffic by going at a snails pace along a Chinese highway.
But the 38-year-old, dressed in a red T-shirt to match his rundown truck, didn't seem to be phased and kept driving until officers forced him to the side of the road.
On closer inspection, following a lengthy explanation from Lu, traffic police eventually let him continue but on one condition - he purchase a pair of goggles so he could keep up with the speed limit.
It's not the first time a frugal driver has been busted cruising along the highway, either.
In an unrelated incident in two men from Kazakhstan decided to save on trailer costs after snapping up a silver Mazda 626 that they wanted to ship back home. 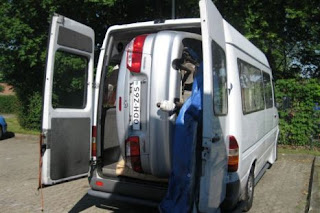 When the car didn't fit in the white van the proper way up – the men called a few pals and loaded it in on its side - putting a mattress underneath to stop the doors getting scratched.
But the trip back home for Konstanty Krol, 38, and Cezar Chmielewski, 28, came to an end when police stopped the heavily laden vehicle after seeing it lurching all over the place in Bargthheide, Germany.
A police spokesman said the van and the car were confiscated and the men ordered to return with a proper transporter for the car before they would be allowed to continue the journey.
News Source: metro.co.uk
Posted by belogkiter at 8:55:00 AM