Four Britons driving a car transformed into a pirate ship were stopped by German police as they drove through Europe on their way to a competition. The motley bunch dressed head-to-toe in pirate attire were on their way to an iconic vehicle contest. 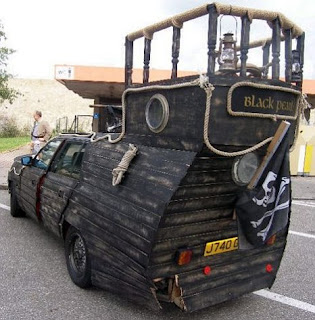 Police couldn’t believe their eyes when they saw the British registered J-plate banger decked out in wooden cladding - complete with a wheel, mast and iconic flag - sailing amongst traffic. It is believed the four-wheeled pirate ship was heading towards Munich when it was spotted and stopped.
The pirate wannabees - who have not been identified by police – were sent on their way after testing negative for alcohol and supplying necessary documentation.
A police spokesman said: ‘They had a road safety certificate for all of the modifications including the mast and the galley and so we wished them a safe voyage and allowed them to continue on their way.’