Man practicing yoga in the middle of a busy road

A Chinese man brought a city centre to near gridlock by practising yoga in the middle of a busy road. 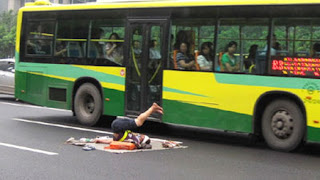 Horns blasted out around the city as the congestion spread to neighbouring roads, reports the Nanfang Daily.

Traffic officers were drafted in to direct vehicles and the man was eventually arrested and taken to a police station. Despite being arrested, this weird fellow always returns to execute his stunt.

A police spokesman said: "Luckily he only practised for an hour, otherwise the whole city's transportation system would have ground to a halt."
Posted by belogkiter at 9:23:00 AM