A series of photos entitled Little Brother Goes to Sleep have become an internet sensation in mainland China, but have also raised questions over the role parents should play in children's lives. 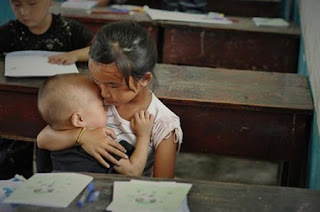 The pictures show a schoolgirl rushing out of class to help put her crying baby brother sleep. After the child falls asleep, the girl returns to her studies. The girl's parents had gone to work, and her grandparents were minding the farm, leaving her to carry her little brother to school and take care of him while studying.


Many Chinese netizens were moved by the pictures, with some even trying to offer financial support, according to the Xiaoxiang Morning Post. 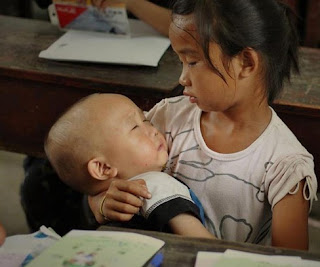 The series' photographer, Lu Qixing, said he took the series of pictures on July 29 at Good Friend elementary school in Shanjiang town, Hunan province. According Wu Jianhui, a teacher at the school, the girl is in the second grade and situations like hers are common in Shanjiang.


The website of the Guang Ming Daily commented on photo series in an article titled Brother Has Gone to Sleep, Parents Please Wake Up, asking whether the girl's parents went out to make money for themselves or for their children. With the premium put on knowledge growing in China, the article said, money cannot substitute a child's education.


One of the girl's parents should stay at home to care for the family, allowing her to dedicate herself to her studies, the newspaper said.
This piece of news is truly heart-warming. At such a young age, this girl has to bear a heavy responsibility that many adults may not be able to go through.
Source: wantchinatimes.com
Posted by belogkiter at 12:00:00 AM