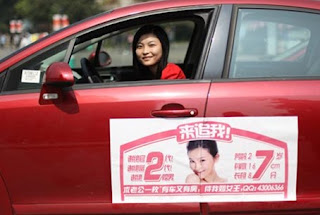 In Changsha, the provincial capital of Hunan in south-central China, a Porsche recently gave chase to a Citroen, starting from the city's Xiaoshan South Road through Yuhuating, eventually forcing the Citroen to pull over by a road near the Central South University of Forestry and Technology.


The local Xiaoxiang Chengbao reported that the female driver who was pursued was named Shi Qian, whose Citroen was bedecked with notices with the words "husband wanted" on them. The man chasing her in the Porsche was a potential suitor and wanted to stop her for the address of her personal website.


The woman's notice read: "Husband wanted. Must have a car and a house and treat me like a queen." Shi also specified a number of criteria, including: "no children of senior officials, no nouveau riche, must not have been married before." Providing some details about herself, Shi advertised that she was a 27-year-old, 167 cm in height, and assigned herself an "appearance score" of 87 out of 100.


The car drew attention wherever she went. One man who saw the notice on Shi's car prodded the friend sitting by his side, saying, "Court her... ask for her phone number and her website address!"


"It is crazy," said one female college student, who nonetheless admitted she admired Shi's courage. "The girl looks pretty but I wouldn't like a sister-in-law like her; it's too blatant a way of seeking a spouse."


Shi Qian said she wrote the notes herself, as she really hopes to get married. Since she began driving her newly decorated Citroen around Changsha from Oct. 5, she attracted more than one thousand visitors to her website. Pictures of her and her car have appeared on many other internet forums and have been viewed by over 100,000 visitors.
At 27, Shi said she was being pushed by her parents to find a husband. Shi's mother supported her unususla approach, saying, "The end justifies the means. As long as it brings my daughter a good husband, whatever steps she takes are fine."