Viewers are in an outcry over London Weight Management's new television commercial, which appears to portray weight loss as the solution to all of a woman's problems. 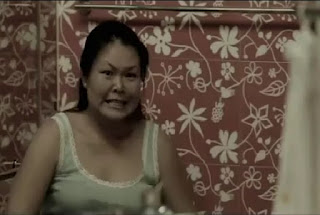 The commercial begins with a scene of a woman standing at a balcony of a high-rise building looking down, with a baby in a pram nearby.
The scene zooms in to show her pained expression, accompanied by Chinese subtitles that translate to: "Women, what do they live for?"
The next scene is of the woman being violently scolded by her boss and served a letter of termination for having a 'poor image.'
"You know that image is very important to our work! In this current state you are in, you are not fit to work here!" the boss shouts at her.
She later weighs herself in the bathroom, with the weighing scale needle hitting 70kg. Frustrated, she throws an object at the mirror and cracks it. In another scene, she is shown struggling to put on a dress and later on unsuccessfully zipping up a pair of pants.
She is depicted being harshly treated by her husband. She later faints while shopping and upon consultation with a doctor, is told she is too fat. The doctor explains to her that obesity leads to a host of health problems and is advised to consider the impact this has on her family.
She finally decides to go to London Weight Management and loses 20kg.
The commercial closes with scenes of her happy in a sexy dress. She is shown laughing and in the loving arms of her husband.
The accompanying voice over says in Mandarin: "Women, what do they live for?"
Which is followed by: "For those you love, and those who love you."
Viewers have taken to blogs and online forums such as Stomp to voice their displeasure, with some labelling it as 'myopic,' 'derogatory' and 'sexist.'
Deputy Editor of The Online Citizen Kristen Han wrote in a blog post titled "There are worse things to be than fat" that while marketing and advertising campaigns exploit the public's obsession with physical appearances, the television commercial "has taken it way too far."
TV host Anita Kapoor blogged that the ad portrays "women as pathetic, unworthy individuals. Losers on every level if they are overweight; winners at every level if they are slim."
A check revealed that the online video, which was first uploaded to YouTube, has since been removed.
The ad comes at an especially inopportune moment, drawing unfavourable comparisons with the recent suicide of Ms Tan Sze Sze - who killed herself along with her 3-year-old son after suffering a broken marriage and a stressful custody battle.
Some say that the ad trivialises post partum depression and suicide.
London Weight Management has defended itself by saying the ad is based on a true story, and that they are not discriminating or 'nauseating' obese women in doing so.
The company has also stressed that they "have not breached any regulation in accordance to the local regulation."
The Advertising Standards Authority of Singapore has not yet taken action to suspend the advertisement, but said they are looking into the matter.
It has been reported that the authorities would be writing to London Weight Management to highlight some of the concerns aired.
I would like to urge consumers to boycott slimming companies that disrespects women. Companies should at least show some respect to women by not degrading them. Instead they should highlight that weight management is good for health and leads a healthy lifestyle rather than potraying that fat women are being rejected by society.
Since the video has been taken down from Youtube, you can watch the video here while it is still available.
News source: Asiaone.com
Posted by belogkiter at 9:45:00 AM